YOU WILL SEE THE BEST OF SYDNEY AND EXPERIENCE MODERN JEWISH LIFE AS A SYDNEY SIDER.

TAKE HOME A DEEPER UNDERSTANDING OF SYDNEY’S PAST, PRESENT AND JEWISH LIFE, HERE.

Come with us and discover Sydney’s iconic destinations, Jewish style.

Your memorable journey awaits you.

SYDNEY AUSTRALIA, IS ONE OF THE WORLD’S MOST LOVED CITIES AND IS BREATHTAKINGLY BEAUTIFUL. THE ULTIMATE DESTINATION THROUGHOUT THE YEAR. THERE ARE ALWAYS PLENTY OF THINGS TO DO IN SYDNEY WHETHER IT'S SUMMER, WINTER, AUTUMN OR SPRING – FROM IDYLLIC BEACHES, THE HISTORIC ROCKS, WORD-CLASS DINING AND GREAT WALKS.

ABOUT YOUR TOUR GUIDE AND FOUNDER OF JEWISH SYDNEY TOURS

Founder, Sydney Jewish Tours and Tour Guide, Darryl Sloshberg, was born and raised in Johannesburg, South Africa, and migrated with family to Sydney in 1998. She and her family, were warmly welcomed into the Jewish community by Australians, as well as Jews, from all around the world who had come to call Sydney home.

Darryl, is deeply passionate about travel and tourism, after falling so deeply in love with, what she calls, “My new country, Australia.” Darryl, has been sharing the beauty of Sydney and her stories with others since taking over, Real Sydney Tours in 2014, and has successfully operated private tours amongst Sydney’s stunning backdrop ever since.

“Whenever I travel I always seek out local authentic experiences and am always curious to know how Jews in far flung countries live, eat and play and what Jewish life is like for them. My dream of showing Jewish visitors the same here is why I founded, Sydney Jewish Tours.”
~ Darryl Sloshberg 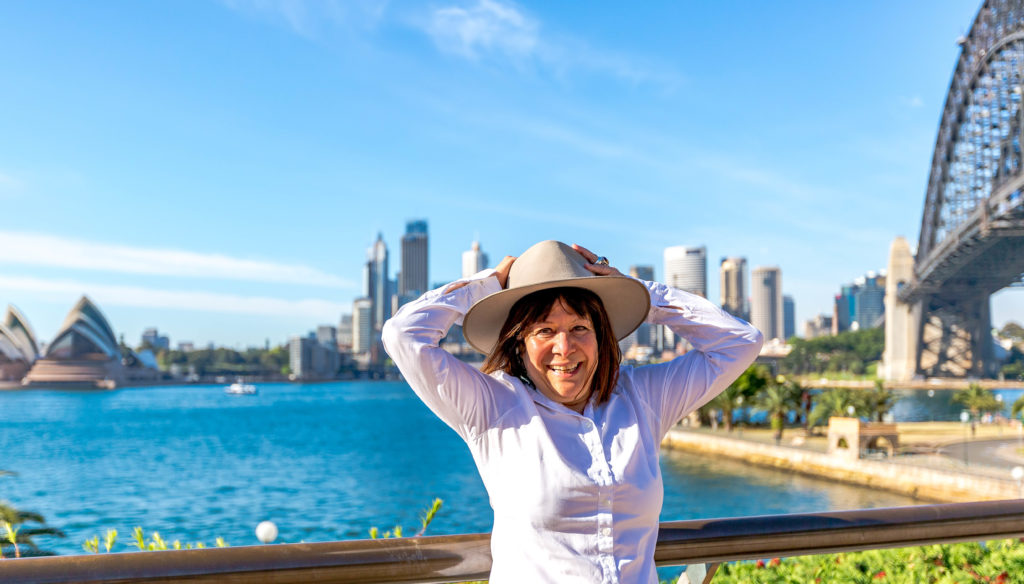 Join us on a Sydney Jewish Tour, you will embark upon an unforgettable, once in a lifetime, memorable Jewish-Australian and personal journey.

> Begin at one of Sydney’s most Historical Waterfront landmarks, The Rocks

> Listen to stories from the Rabbi, at Our Big Kitchen

> Stroll, and lunch at Bondi Beach

I will personally pick you up from your hotel by arrangement.

We start at the beginning of the European Settlement here; The Rocks, the oldest heritage listed part of Sydney, where you will be entertained with colourful stories of Jews on the First Fleet. I will show you where the first Jewish shops and businesses began and you will get to know about some of the famous convicts. You will hear the story of Ruth Abrams, a young Jewish milliner, all of 15 years-old when she was sent here on the First Fleet.

The colourful Jewish peoples’ stories from hundreds of years ago, live on today.

We visit The Sydney Jewish Museum which houses original memorabilia related to the Holocaust, Judaica and Australian Jewish History.

We then meander through the streets of the Eastern Suburbs, where you’ll see the homes of prominent Australian Jews who have made major contributions to life in Sydney – you will learn about their rise – becoming business and philanthropic leaders, in Australia.

Next, we visit Central Synagogue, the largest in the Southern Hemisphere, accommodating 2500 people and it has the largest Jewish congregation in Australasia. You may even talk to the Rabbi here and play the game of Jewish Geography (6 degrees of separation). The majestic Synagogue is a marvel of modern architecture flooded with natural lighting by an oculus in the ceiling. Imported Jerusalem stone adorns the Aron Kodesh, which is positioned in a direct line with Jerusalem.

One of the highlights is a visit to Our Big Kitchen. There are often tears here as moving stories are told by the Rabbi or his charming wife, or staff. This is a phenomenal Jewish community project started in the Rabbis home kitchen which is now globally recognized, crossing all boundaries of race, religion and class. The kitchen is a place where love is spread through food and the human stories – of people getting a second chance at life – while cooking for those less fortunate, it is truly compelling. There is also the opportunity for our guests to jump in and get their hands to work should they so wish.

You’ll stroll the iconic Bondi Beach, sip coffee or even lunch. We go local for food as we know all the authentic haunts. Kosher options are also provided for, should that be a requirement.

Then we hit Hall Street, home to the Jewish Butcher, Kosher Bakery and Restaurant as well as well as visiting the Jewish bookstore.

Lastly, we take you to our secretly known spots for jaw dropping views of the breathtaking Sydney Harbour with the Harbour Bridge and Opera House as our backdrop.

Not another vehicle in sight, only locals walking about, you and us – reflecting on Sydney’s beauty, idyllic locations, Jewish family stories, sensational flavours, histories and an unforgettable Jewish-style Australian journey.

“I want to show you the heart of Sydney Jewish life and I want you to meet and talk to Jewish locals. This is a very interactive and powerfully emotional day.” –– Darryl Sloshberg

This is a Sydney-insider tour with a big heart.

You will come as guests and leave as friends.

Duration: 4 hours (optional 6-hour tours can be organized on request)

Ages: all ages appropriate. Sydney Jewish Tours are designed to accommodate everyone.

Physical Rating: Light. Walking is suitable for most fitness levels. Nothing too challenging.

Transport: You do not need transport. We pick you up!

Extra expense: breakfast and/or lunch is at your own expense on the day.